Feel free to ask any question 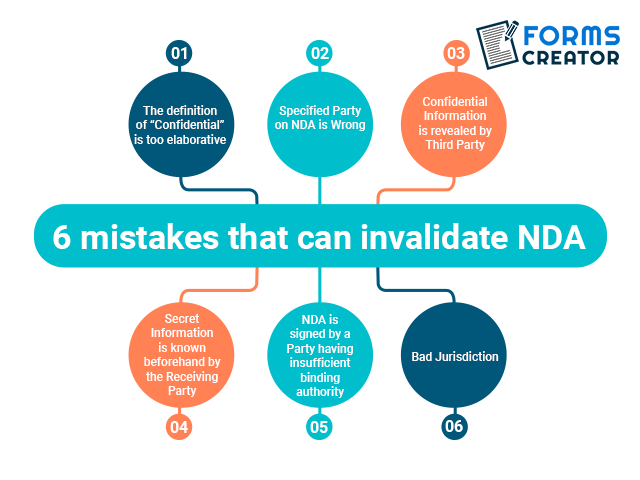 6 Mistakes that can Invalidate NDA

Creating Free Non-Disclosure Agreement online is what anyone can do these days. But it is important to stress over that you don’t make any mistakes while making this legal form as they may invite big troubles without you seeing them coming.

Specialized processes, client lists, and trade secrets are some of the sensitive information held by the business that directs its survival or demise. No wonder “secret” or “confidential” means differently for businesses. It may be any document, design, sketch, analysis, source code, manufacturing process or technical procedures.

We need a Non-Disclosure Agreement to protect such sensitive information.

One may assume that the NDA is being prepared for the correct party but it is also important to have the correct name specified on the legal document. Additionally, some simple things like forgetting to include a “limited” or misspelled company’s name can also invalidate the document immediately.

You may check out General Release of Liability Form PDF

The NDA may also get invalidated if the Receiving Party gets the confidential details via third-party and not through your legal document.

It is important that the NDA is signed by the authorized persons only to consider it valid. If the company’s representative signs the NDA who has no authority to make contractual decisions nor is a partner of the firm then the legal document is invalid.

NDAs may vary according to states and hence it is vital to clarify the jurisdiction you wish to apply to the agreement. This ensures feasibility and enforcement of the agreement instead of invalidating the NDA immediately.

Using our Legal Document Generator, you can create a Free Non-Disclosure Agreement in a few minutes. Also, you need not worry if any of the above-mentioned mistakes will be made in your document as the template is created and verified by professionals.