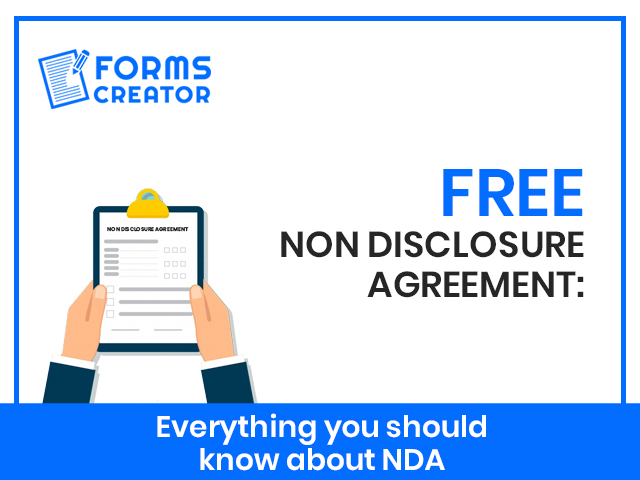 Free Non Disclosure Agreement: Everything you should know about NDA

If you are in the corporate realm, you must have come across the term NDA multiple times. NDA stands for a Non-disclosure agreement. It is a legal document that is intended to protect the confidential information of the firm or the company.

If you are worried about formulating your own NDA or understanding. This blog intends to inform you about everything you need to know about NDA.

Free NDA Form: what it is?

As said earlier, NDA is a Non-disclosure agreement that protects any confidential information shared between both parties. While conducting a business, both parties tend to share a considerable amount of private information that may affect the working and success of the company if used inappropriately or leaked.

NDA allows both parties to conduct a seamless business flow that will not hinder in the future.

NDA protects the company’s proprietary secrets that otherwise revealed may cause huge losses that can translate to bigger financial losses.

Usually, the receiving party signs a nondisclosure agreement when the information is shared during a business deal. When there is only a one-way path of sensitive information, that is, when the receiver deals with the confidential information, a unilateral NDA can be agreed upon.

Legal documents and understanding them can be quite tricky, and misinterpreting any information can leave you in jeopardy and years of legal disputes. Hence, to make it easier, here are few terms that you thoroughly look for in an NDA.

Definition and scope of the NDA is an important aspect you should consider looking at. It highlights what falls into confidentiality, and it should be tailor-made according to your business deal and type.

Look out for a non-compete statement that restricts you from working with other firms and companies in the future.

Dealing with legal disputes can be tedious and deteriorating for one’s career. Hence, always read any legal documents like NDA carefully. In case you want to generate NDA without any hassle, use a legal document generator.