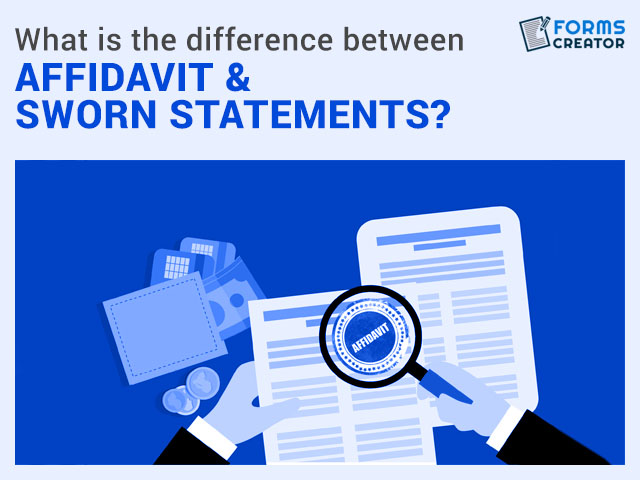 What is the difference between affidavit & sworn statements?

You may have used many affidavit formats to a date or probably gone through affidavit examples right in front of your eyes.

It’s great if you’re well-to-do with affidavits & understand the associated terms. If it’s not your cup of tea, this blog is all about the terms that often bring confusion among laymen. Let’s check it out.

An affidavit can be clearly defined as a written statement by an individual who swears that the mentions are true. It’s only valid when made voluntarily & without coercion.

In other words, it is an oath produced along with witness statements to prove the truthfulness of a certain statement in the court. An affidavit can also be produced on behalf of someone else.

Individual making affidavit cannot be penalized if they fail to include information which they weren’t aware of.

Do you want to download a free sample affidavit form?

Purpose of making an affidavit

The affidavit is a quintessential legal document required to solve disputes before the court. If the court requires them, you have to produce them. Here are some instances:

What are sworn statements?

Sworn statements are written statements in a lawsuit. This statement is followed by a paragraph when the signing person attests that the given information is true to the best of their knowledge. The respective person is required to sign and date the photograph that is referred to as ‘endorsement paragraph’.

As the endorsement paragraph is specified in the document, the party (or parties) signing the legal document is bind to it. If they are found guilty of perjury in court, they have to suffer serious penalties.

If this endorsement paragraph is not mentioned, the document is just a statement & may be considered less reliable.

Purpose of making a sworn statement

The sworn statement must be in a clear written form. Thus, they are to be used only for the purposes granted by law.

The major purpose of a sworn statement is to write a clearly understood form of testifying under oath. If the statement is clear, the chances of misinterpretation will be less.

Do you need to notarize a sworn statement?

Sworn statements are not needed to be notarized because they are legally binding statements. In case, if a sworn statement is found to be untrue, the maker could be charged with perjury.

There is a fine line of difference between an affidavit & a sworn statement.

Affidavits have been signed, witnessed & certified by a public official who is usually a notary public or a court official. As it contains similar statements & claims, the certification makes the document more acceptable as a type of evidence.

Some find the process of having a statement certified & signed by a notary public or court official as time-consuming. Many courts recognize this & thus treat sworn statements in a similar fashion to affidavits.

We hope that you’ve got your concepts clear!

If you want to create an affidavit online then our free legal document creator can help.